Is a Big Algorithm Update on the Horizon? 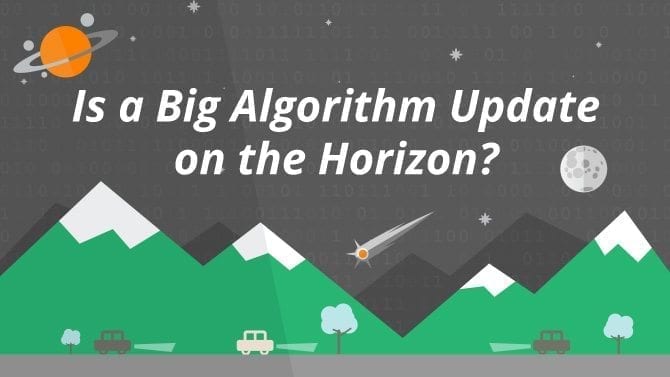 On June 16, MozCast reported an all-time high temperature of 102 degrees—and no, they aren’t talking about the weather. MozCast’s forecast is referring to activity on the Google algorithm. There’s a whole formula behind it, but basically, the hotter it is, the more change was detected on the SERPs. So when they reported record highs, the SEO world was abuzz with speculation, excitement, and a little bit of nervousness.

But it didn’t last long.

On June 18, Search Engine Land released a statement straight from Google that said the activity on the SERPs had nothing to do with Panda or Penguin. Instead, it was just a tweak to their core algorithm (kind of like the Phantom Update we told you about) that hones in on the quality of the content instead of allowing clickbait articles to rule Page One.

So why was there so much movement in the SERPs?

This is where it gets interesting. The people that eat, breathe, and sleep SEO, like Dr. Pete Meyers from Moz, couldn’t just take that for an answer—the MozCast was record-breaking, and it had to be caused by something. So if it wasn’t an algorithm update, what was it? After comparing loads of data, it appeared that the spike in SERP activity was related to HTTPS in some way—but again, Google denied the possibility of an HTTPS algorithm update.

And then it was discovered that Wikipedia—which just happens to hold the most 1-5 spots in the Google rankings—began changing all of their URLs from HTTP to HTTPS. As you know, this means they are now secure sites, which has long been a factor in Google’s algorithm. So it appears that Wikipedia was simply benefitting from past updates, and making some waves in the process.

It appears that the so-called algorithm update that caused a commotion earlier in the month had a lot to do with Wikipedia switching their pages to HTTPS, and a little bit to do with the constant tweaks Google makes to their core algorithm. But one thing is for certain, the next big algorithm update is always right around the corner, and many people are guessing it’s going to make an appearance in July 2015. They are also predicting it will focus on the importance of HTTPS, as well as further modifications to how they determine quality content.

At Zero Gravity Marketing, we are always up on the latest algorithm updates and speculations so your site can continue to rank highly. We will keep an eye on the impending changes and let you know what we find out. In the meantime, contact us about our SEO services so your site can benefit from what we discover.

Most Common SEO Mistakes for 2015