Is Apple Search on the Horizon? Apple Quietly Releases AppleBot 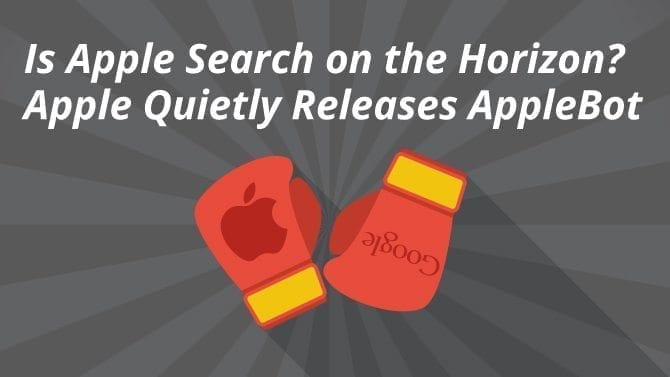 Apple may, in the minds of some, rule the mobile marketplace, but up until recently they have been willing to let Google rule the search engine world. This is beginning to change. Without much fanfare, Apple has released its own crawler, the bot that scans the Web to index pages to return search results, and created a page on its support site that had the details, according to The Next Web.

AppleBot, as it is called, is allowing Apple to index pages without relying on a third party search provider. Many Apple experts believe this is the first step toward a true Apple search engine.

No Longer Relying on Google?

Up until this spring, when news of AppleBot leaked into the tech world, Apple has had an ongoing partnership with Google, which meant that Apple devices used Google as the default search engine through its Safari browser. However, the Safari search default may be up for grabs, as industry insiders believe the search deal between Google and Apple is coming to an end.

This could have dire consequences for Google. Safari drives around 26 percent of US Internet traffic, falling behind Chrome, making it the second most important browser. If Google loses that traffic, it will lose a huge amount of its mobile traffic, paid clicks and market share. This will not only hurt Google, but also those companies and individuals who market through Google’s paid search marketing products.

Earlier predictions stated that Google would likely keep the Apple contract, with many claiming that Tim Cook has less of a drive to move away from Google the way Steve Jobs would have done. The rumors of AppleBot have caused some to wonder whether or not Apple is making a move towards its own search results.

In addition to the appearance of AppleBot, Apple has posted a job ad looking for an Engineering Project Manager for Apple Search. Early job ads for the position claimed it was looking for a program manager to oversee the backend for a “search platform supporting hundreds of millions of users,” according to CultofMac.com.

Early Rumors Hard to Pin Down

When news of AppleBot leaked, Apple stated it was using the crawler to add data, such as movie information, to some of its products, like Siri. However, more recent reports indicate that Apple has a search team with the same leadership that once led Topsy, and the timing of AppleBot with the upcoming end to the Google contract means the time may be right for Apple to jump into the search world.

What This Change Means

For the average Apple user, the change from Google to Apple search may not be an obvious one. However, search results could be different, and those who are used to what Google offers may not like the search results. Of course, Apple product users may be able to set the default back to Google for search, but as with other apps, Apple may make altering the default settings difficult, and many users will simply learn to use the new search engine rather than making the switch.

Where these changes will be felt the most strongly is in those who optimize for the search engines and advertise on them. SEO agency experts not only have Google, Bing and Yahoo!, but they may also have Apple’s search.

If Apple’s track record can be trusted, any future Apple Search product will be brought to the market with loud fanfare and a public product unveiling. For now, those in the tech industry can simply speculate about what AppleBot will mean.