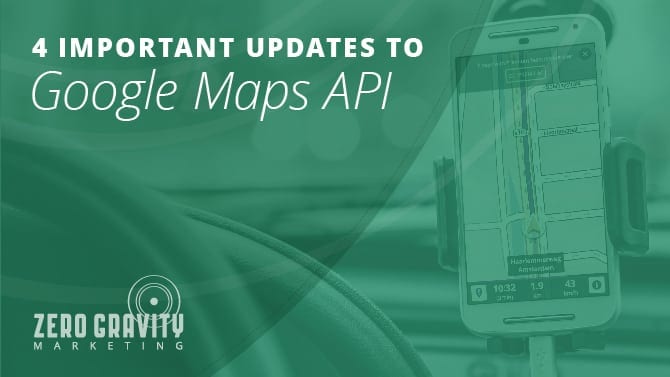 Google recently launched some major updates to its Google Maps API platform that should make it easier for developers to adopt different features into their own applications. The most visible update was rebranding its popular platform from Google Maps API to Google Maps Platform.

The stated goal for the changes was providing developers with more transparency and allowing for more flexibility in how they used the APIs. We’ll go over the four Google Maps changes that had the biggest impact on developers.

1. The Introduction Of Maps, Routes, And Places

Google combined its existing APIs into three new core products outlined below. Any existing APIs you’ve already built into currently running applications should continue functioning normally. This restructuring makes it easier for developers to locate new features to include in their websites and applications.

We’ve broken out where developers can find their existing Google Maps APIs within the new product infrastructure.

Google also upgraded the customer experience by making all products part of the Google Cloud Platform Console. Developers can track their usage, manage all their projects, and investigate incorporating other Google Cloud products into their creations.

The use of API keys became mandatory on June 11th, 2018. Users attempting to access APIs without a key after that date receive degraded performance including a darkened map and errors.

Google previously offered developers a choice of a Standard or Premium charging a flat fee for usage and support only at the Premium level. They’re now offering a single billing plan going forward that offers support to everyone.

Developers receive $200.00 in free usage each month, then get billed for any overages they incur. The credits can be applied to any APIs within Maps, Routes, or Places. The display of maps within iOS, Android, and Embed is free and doesn’t apply towards the $200.00 credit. Users receive free Maps URLs as well.

The new plans require you to sign up for a billing account to cover any extra charges. Those lacking a credit or debit card to sign up can look into alternatives with a Google Map Partner. Using the Google Maps Platform without an account could lead to downgraded performance if you go over the $200.00 free credit limit.

Users aren’t required to commit to any monthly or yearly plan and don’t have to worry about paying termination fees if they decide to cancel their account. Those who previously signed up for one of the Standard or Premium plans can contact customer service about transitioning to the more flexible option.

The combination of the streamlined APIs and pay-as-you-go billing makes it easier for companies to handle surges in usage. Having a billing account available means there’s no need to worry about your application performance being downgraded. It allows you to cover any increase in charges as your business grows and attracts a larger number of users to your applications.

Google’s global reach helps provide an additional layer of stability. They’re continuously expanding their network of partners around the world.

The updated Google Maps Platform can be embedded into ridesharing applications to improve the navigation experience of their customers. Business can locate their vehicles in real time, get visualizations of where their assets traveled around different locations, and provide routing help for vehicles on complex trips.

Time will tell how well developers adapt to the new changes from Google. They appear to be trying to balance the needs of smaller developers with managing the resources required to support applications using a larger amount of bandwidth. The popularity of the Google Maps API, now Google Platform, may help ease the sting for developers still smarting from transitioning away from the completely free version provided in years past.

For assistance with Google Maps or more information on how to transition to the new updates, contact Zero Gravity Marketing, today.

New Facebook Targeting Changes: What You Need to Know