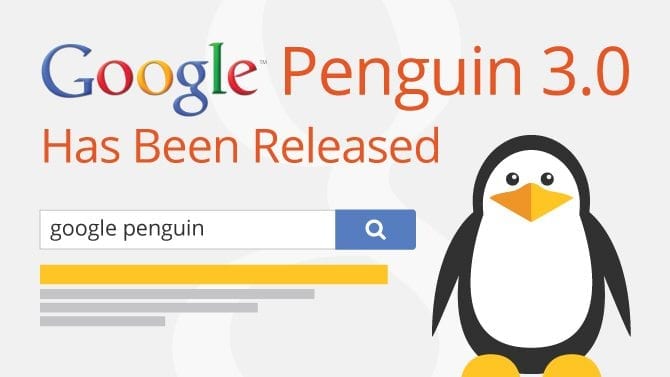 Google Penguin 3.0 Has Been Released

October 20, 2014 – Honest webmasters rejoice: The Google Penguin 3.0 algorithm update you have been waiting for has finally been released. Rumors started spreading at the beginning of the month when Gary Illyes, Google’s Search Quality Engineer, reported at the Search Marketing Expo East that a Penguin update may or may not be arriving shortly.

Of course, the vagueness of the announcement was enough to get SEO forums everywhere lighting up with excitement—and worry. But the rumors can stop, because it is official: Penguin 3.0 was released on Friday night.

What is Penguin 3.0 All About?

Essentially, the Penguin algorithm is all about making sure the sites that use spammy link building tactics to get rankings don’t get rewarded for it. In other words, the sites that are working hard to gain legitimate links back to their site will receive the high rankings they deserve.

Why is the Penguin Update So Exciting?

Because it takes an update to the Penguin algorithm for you to see if all of your hard work has been paying off. That’s right, if you were dinged by the last Penguin update—over one year ago—then you have been working hard to disavow those once-allowed-and-encouraged spammy links to replace them with authentic ones.

So you have been busy making changes, but you had no idea if you were doing what you were supposed to be doing until now because Penguin is stubborn and doesn’t reevaluate your site until it updates. For this reason, many webmasters are claiming that Penguin 3.0 is the most anticipated Google update ever.

What Does it Mean for Me?

Clearly, it means that it’s either going to be a very happy day for you, or you are going to be really aggravated. If you listened to the last update and ensured that all of your links are the real deal, then you can pull out the party hats and blowers. However, if you haven’t quite finished the job (it would have had to be completed before October for it to count), then you have some waiting to do until you will see your rankings improve.

How Long Until I Can Redeem Myself?

If you are one of the unfortunate sites to get hit by Google Penguin, there is no indication of when the next Penguin update will be. That being said, Google has reported that along with the new algorithm change comes a revised system that will supposedly update more often than once per year.

Also, it is worth noting that a dip in the rankings doesn’t necessarily mean Google has penalized you directly. If your site contains links that were from sites that Google now considers spammy, then your rankings will drop, but your site will not receive a penalty itself. This is probably the best reason for a drop, because there is not bad blood associated with your domain.

What Do I Need to Do About the Penguin 3.0 Update?

Whether your site received a boost or a drop in the rankings, it is more critical than ever that you seek out genuine inbound links to your site. These votes for your site will always be important. And if you have spammy ones, you better remove them ASAP, because there is no telling when the next update will be, and you want to be ready.