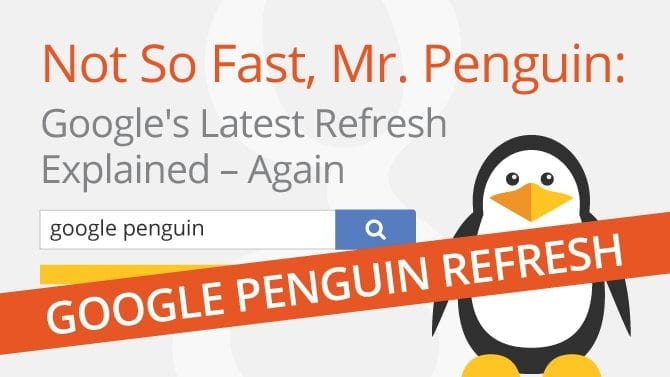 As usual, the SEO world is unpredictable and things change on a seemingly endless basis. The latest Penguin update is no exception. On Monday, we, along with the rest of the country, reported that a full-on Google Penguin update had been launched. And honestly, we were pretty excited about it, as we are sure you were, too. However, now that the dust has settled, it’s pretty clear that Penguin 3.0 is one of the most anti-climactic updates in Google’s history. Oh wait—it’s called a refresh. That’s right, Google didn’t even rewrite their Penguin algorithm; they simply reran it. Bummer. So here’s the real scoop about the new Penguin refresh.

It is Not Complete

On Monday morning, webmasters everywhere were either thrilled or enraged as they discovered their new position on the SERPs, thinking that the Penguin refresh was complete and they could either celebrate or get busy trying to rectify the situation. And then, on Tuesday, Pierre Far set the record straight that, in fact, the rollout is going to be slow and steady, and companies should just have some patience during the next few weeks to see where they really end up.

In short, the Penguin refresh is only going to alter 1% of English search queries. Basically, the already-existing Penguin algorithm was reran to reward the sites that fixed previous errors—or punish the sites that made new ones. That’s it. However, notice that the above statistic only mentions English searches. The Penguin refresh was initiated worldwide, so other countries and languages may notice a larger impact. Only the waiting game will answer that question.

The Future is Unclear

Even though this Penguin refresh was disappointing to many webmasters, there may be some hope to be had. After all, there is still the elusive announcement made at the Search Marketing Expo East last month that there will be a “large re-write of the algorithm” in the near future. So maybe this Penguin refresh was just a teaser to appease the complainers that have been waiting over a year for a second chance. Or maybe this really is all Google has for now. Time will tell, but you know one thing is for sure; there’s always another update around the corner.

Regardless of what the future holds, the importance of SEO is not going anywhere. What Google values may change, but where you are on the SERPs will always have a dramatic impact on your website’s traffic. That’s where we come in. Our ongoing SEO services will guarantee that your site is always following the rules and abiding by Google’s ever-changing requests. Contact us today to find out more. It is an investment that you can’t afford to pass by.