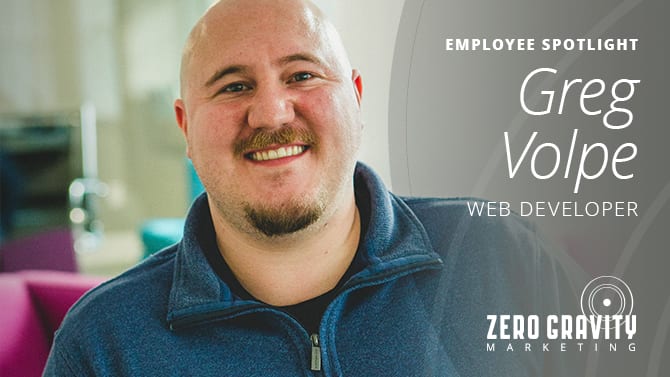 Zero Gravity Marketing has risen above the competition to become a top digital marketing firm in Connecticut, and we credit it to our unique, diverse team. We appreciate every player, and we know that without him or her, we wouldn’t be the successful marketing firm we are today.

With this in mind, we have launched an Employee Spotlight initiative. Our hope is that, as you learn more about each of the talented individuals at our marketing firm, you will gain further insight into why we are so great together.

Today, we are thrilled to introduce Greg Volpe, Web Developer. We have asked him a few questions to provide an insider’s look as to what makes Greg tick. Enjoy!

Where are you from?

I was born in Floral Park, Long Island, but moved to Connecticut when I was ten.  I’ve been in the Brookfield / New Milford area for the last 19 years.

How did you choose this career path?

I have always been interested in technology and started building computers in high school. When I originally signed up for the computer science program at Western Connecticut State University, I thought it was more hands-on computer work like building and repairing computers and networks. It turned about to be programming which I ended up enjoying more than building computers! Around the time that I started college, I began teaching myself how to use WordPress and have been working in web programming ever since.

Being given an idea or an image of what a website should look or act like and working with a team to turn that into something interactive and real.

What is your favorite part of being a member of the ZGM team?

The people here are what makes ZGM great – everyone is available and willing to help each other.  I also get to learn and use lots of new technologies which is fantastic!

What is the strangest job you’ve ever had?

I volunteered as a firefighter/EMT in Brookfield for ten years which is not a strange job by any means, but we definitely had some strange calls.  My favorite was when someone called to report a UFO landing on top of an apartment complex, so the police department dispatched us to investigate.  When we arrived on scene the caller was outside urging us to bring axes to the roof for protection.  The UFO turned out to be a Chinese lantern.

What is your favorite quote?

Do you have any pets?

What would you consider to be your greatest accomplishment?

Do you have any hobbies outside of work?

Taking my dogs to the park and doing improvements around the house.

Pick three words to describe yourself.

If you were a Crayola crayon, what color would you be?

You’re about to perform in a karaoke bar. What song do you pick?

Build Me up Buttercup – only song I know all the words to.

If you could live in a TV show, book, or movie, which one would you pick?

Any movie from the Marvel Universe.

If you could hang out with anyone for a day, alive or dead, who would it be and why?

My grandfathers, they both passed when I was really little so I’d love to get a day just to get to know them.

Google Ads: Does it Really Work?