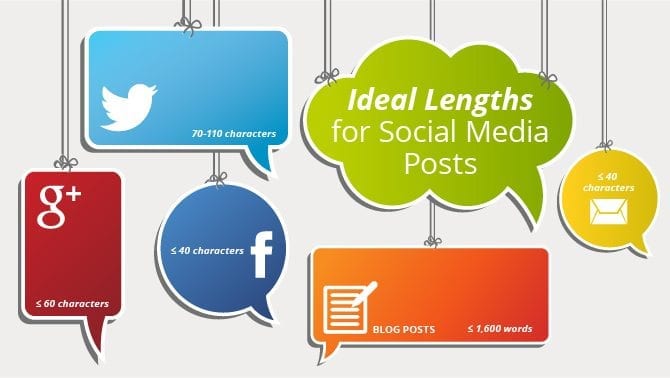 These days, most companies spend a healthy amount of time – and money – crafting the perfect social media posts to drive engagement and generate leads. But are those posts performing as well as they could be?

Without an in-depth statistical analysis, all you’ve got is anecdotal evidence – which can sometimes be misleading. Don’t have the time to do that kind of analysis? The following guidelines will help.

Surprisingly, research shows that Facebook posts perform best when they’re extremely brief – 40 or fewer characters, to be exact. These pithy posts receive 86% more fan engagement, despite the fact that only 5% of brand posts conform to this standard.

Generally speaking, user engagement on Twitter increases along with tweet length. Extremely short tweets – those from 0-40 characters – have a very low engagement rate, in terms of retweets. The sweet spot is between 70-110 characters – long enough to convey a complete thought, but short enough to allow retweeters to add their own commentary. One study found that tweets of around 100 characters got a 17% higher engagement rate – and that including a link in the tweet resulted in an 86% higher retweet rate.

Ideally, a strong Google+ headline should be brief – no more than 60 characters. Otherwise, the headline bumps to two lines, which takes valuable real estate away from the beginning of the post itself. If you can’t summarize the idea of your post in 60 characters, you can add context with the first sentence. Google+’s post display includes about three lines of copy before the “Read more” link – provided you mind the rule about keeping the headline to one line.

You might be surprised to find that the ideal length of a blog post is measured not in words but in minutes – and that the number of minutes is quite a bit higher than you might imagine. Ideally, blog posts should take 7 minutes to read – which works out to around 1,600 words. An article that is heavy on images or graphs could be considerably shorter – maybe 1,000 words.

End of day, these rules will vary depending on a number of factors, like overall content strategy and quality of copywriting. But it certainly can’t hurt to experiment with these statistics to see if they hold up for you. Ideally, you will want to do your own analysis – and to remember that social media trends are constantly shifting, so today’s statistical fact may be tomorrow’s old news. Keep up with the trends by following our blog or inquiring about our social media services.