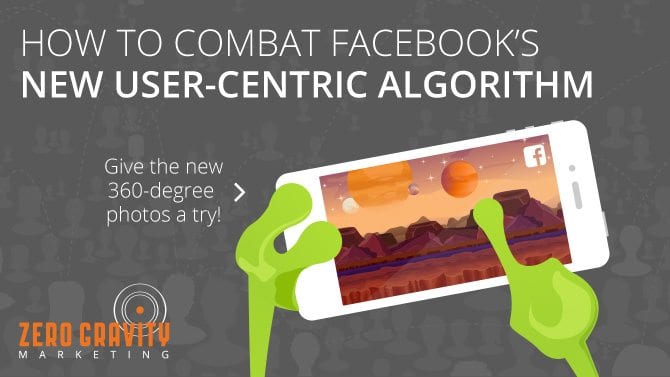 Facebook—love it or hate it, it’s a necessity for any business to succeed these days. Not only does it offer super targeted marketing options, it’s an excellent place to build trust with your target audience and gain their loyalty. And until recently, Facebook was all about brands using their social network to grow their business, giving them prime real estate on the newsfeed. But on June 29, 2016, Facebook announced that they are adjusting their algorithm to give their users back the spotlight.

If the amount of ads seen on Facebook these days is any indication, it’s clear that Facebook is doing quite well on their ad sales. However, that isn’t what Facebook users want. From the year 2014 to 2015, the amount of posts published by users went down 21 percent, which had a negative impact on the amount of overall shares by 5.5%. Since Facebook relies on the consistent posts of its users to be successful—because without interesting things to read, people will stop using the site—this is really bad news. If they don’t start prioritizing the personal posts over the business posts, it won’t be long before the general public stops using the site altogether.

The new Facebook algorithm will undoubtedly affect Facebook Page owners, but it’s important to keep the bigger picture in mind. If Facebook does nothing, and the interaction of users continues to decline, it won’t really matter where your posts show up on the newsfeed because nobody will be reading them anyway. So, in a way—and in the long run—the Facebook newsfeed change is helping brands because it is getting more people active on the site again. However, right now, if you still want to stay relevant, you are going to have to take action.

The bottom line is that content shared by Facebook users will be given clout over content shared by businesses. So the secret to combat the new Facebook algorithm is to post such amazing content that your followers can’t help but share it with their friends and family. And when it comes from them, it gets seen. Here are a few ideas to get you started:

Even with the new Facebook algorithm, we still think the social networking site is one of the best ways to spend your digital marketing dollars, and the same rules still apply when setting up your ads. However, when it comes to your organic reach, you need to get a lot more creative. As long as your goal is to encourage shares from your followers—which will get priority in the new Facebook algorithm—then you can continue to reap the rewards of an active Facebook page.

To learn more about using Facebook for business, or to have us take over your social media marketing, contact Zero Gravity Marketing today.