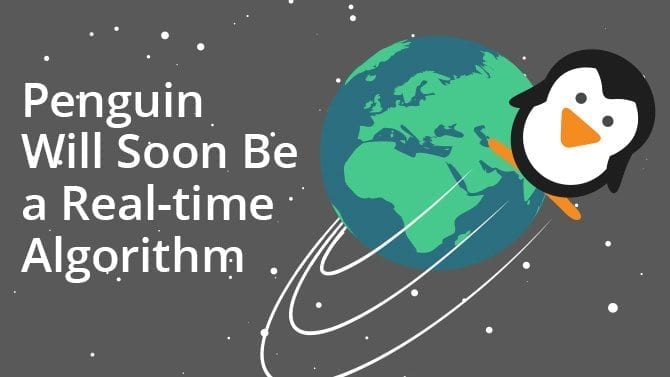 Google’s Penguin Update Will Soon Be a Real-time Algorithm

If you have ever received a penalty as a result of a Google Penguin update, you know how frustrating it can be. Even if you fix the issue immediately (which you should be doing), you still have to wait for the next Penguin update to see the corrected results, which can sometimes take months, or even a year—like in the case of Penguin 2.1 to Penguin 3.0–to happen. But pretty soon, this will no longer be the case.

Why Is This Google Penguin Update Such a Big Deal?

As you probably know, the Penguin algorithm is all about catching and penalizing the sites that are trying to cheat the search engine results by using fake backlinks. Backlinks are a very important part of SEO if they come from legitimate sources, so a lot of people tried to work the system by creating backlinks from bogus web pages just to boost their place on the SERPs. And not all of it was intentional. Some sites unknowingly received low-quality backlinks and their ranking suffered dramatically because of it.

Currently, once the Penguin algorithm catches a site and penalizes them, the site isn’t able to regain their position until the next Google update, no matter how quickly they rectify the mistake. If you are the site that was penalized, this is a huge deal. So the goal of the next Penguin update is to become a real-time algorithm, allowing sites to quickly bounce back after they remove or disavow the bad backlink through Google Search Console.

This Penguin algorithm update also means that you can be penalized for a poor backlink just as quickly, but we feel confident you know better by now.

When Will the Real-time Algorithm Update Take Effect?

Google has been teasing us with the idea of this Penguin algorithm update since June, but they couldn’t tell us when this exciting change might happen. In July, again they taunted us with the details of the real-time algorithm, but were still leery of giving a concrete date. Well, on October 1st, at SMX East, Gary Illyes alluded to the fact that the Penguin update will be here by the end of the year. He used the word “hope” as to not promise anything for sure, but we have a feeling we will be seeing it sooner than later.

What About the Panda Algorithm?

Unfortunately, the real-time algorithm concept will only apply to the Penguin update. Since the Panda algorithm is based around the quality of the content on your site instead of just poor backlinks, Google believes it will always entail a manual data refresh. But, then again, it is Google, so we will see. For now, we are just thankful that the next Penguin update will be a real-time algorithm.

If you have any questions about the upcoming Penguin update, or you need help disavowing your bad backlinks, contact Zero Gravity Marketing today.

How Apple is Altering the Ad Blocker Game