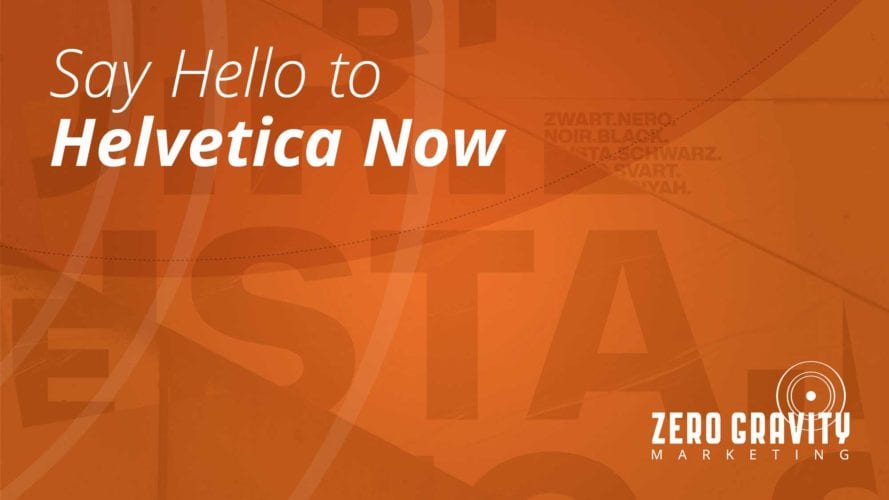 Helvetica is one of the most recognizable fonts available in the digital and print worlds. Originally developed in 1957, the font has been used by various corporate giants including American Airlines, Toyota, and more. It’s even the font of choice for all New York City subway signage.

The font hasn’t been updated since 1983 when it was digitized as Helvetica Neue. But now, for the first time in over 35 years, Helvetica is getting a facelift.

A Brand-New Helvetica for the Digital Age

Monotype, the oldest type company in the world, has expanded the Helvetica font family with a redesign of the iconic typeface. The update is dubbed Helvetica Now, and after five years of development, it’s finally available for public use.

Helvetica Now includes 40,000 individually redrawn characters that were designed for the digital age. It has 48 fonts that are available in three optical sizes – giving it the versatility required for use on tiny smartwatch screens and massive billboards alike. The smallest size, “Micro,” is ideal for extremely small text sizes, while “Text” is best used for standard, day-to-day writing, and design. The largest size, “Display,” was created specifically for large signage.

Despite having a cult following that sings its praises, the original Helvetica design has a few faults that Helvetica Now sets out to fix. Most notably, the font did not function well at small sizes – the letters often bunched together, causing the spacing in between characters to become uneven. Helvetica Neue also has its own problems. The 1983 redesign was made from a single master drawing that was cut at one size. This caused the punctuation and currency symbols to look off-balance next to small characters.

These problems weren’t just a nuisance, they actually caused many prominent brands – including Google, Apple, Netflix, and IBM – to drop the font and create their own similar typefaces. Helvetica Now was designed to remedy these issues and hopefully allow brands to utilize the font in more ways, online and off.

Going Back to Basics

Helvetica Now has “everything we love about [the original] Helvetica and everything we need for typography today,” notes Monotype. It’s reminiscent of the font’s 1957 style, bringing back several characteristics of the original font that have been lost over the past 35 years, such as the single-story lowercase “a” and capital “R” with straight legs.

Designers and brands who wish to use the new and improved Helvetica Now will have to buy a license before they can begin using it. Even so, we expect to see this redesign used in a variety of applications in the coming years.

Follow in Helvetica’s Footsteps with Your Own Brand Refresh

Are you interested in refreshing your company’s presence with a brand-new font like Helvetica Now? Zero Gravity Marketing can help. We can tackle any design project, whether it’s updating your company logo, creating fresh social media graphics, or even dreaming up a complete branding overhaul. Contact us today to get in touch with one of our talented graphic designers.

SEO Checklist for Launching a Site