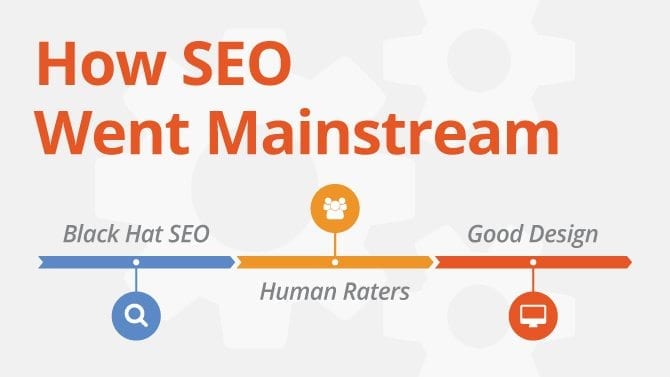 History moves fast in the online world, so it’s easy to forget the early, sketchy days of search engine optimization. For a deeper understanding of our current environment of semantic search and high-quality organic language, it’s worth taking a minute to look back at the enormous changes that SEO has gone through.

Only a few years ago, SEO was considered to be a (not very reputable) way of gaming the system. In those early days of online commerce, Google and other search engines approached written language from a mechanistic approach. As the concept of ranked search results emerged, competition sprang up for optimizing a site’s position in those rankings. SEO became a behind-the-scenes race, utilizing sometimes sneaky techniques to capture the attention of the automated algorithms that were being developed. Many mainstream webmasters took a dim view of SEO in those early days, seeing it as trickery aimed at “fooling” the search engines. Unscrupulous “black hat” SEO schemes were hard to distinguish from standard practices, and the resulting confusion gave rise to a belief that if your site was legitimate you didn’t need to stoop to SEO at all.

In a climate where SEO was considered deceptive, spammers were the ones who first became good at it. Their many insidious practices were termed “black hat” SEO. You could rise in the search rankings by loading your site with masses of keywords and metatags, and spammers rapidly figured out ways to hide their walls of keywords. They could code them into the site as image descriptions, or they could hide them by making them the same color as the website background. Search engines figured out this ploy, and developing a different algorithm that placed weight on incoming links. By this time, reputable commercial websites were making a straightforward effort to build their online reputations, while huge link-selling and link-swapping networks were springing up and selling their services. Incoming links lost all meaningful relevance, and once again search engine developers scrambled to discover ways to cull out the spammers and identify legitimate sites.

It finally became obvious to the large search engines that human beings were needed in the process of developing algorithms that could identify meaningful human language. Google and Bing recruited thousands of contract workers to evaluate and rank the quality of millions of experimental search results. By a progression of updates and revisions over the past six years or so, SEO has increasingly reflected true quality and fresh, meaningful content. “Gaming the system” has become next to impossible, as Search Engine Guide points out, and the complex art of true SEO has correspondingly risen in value.

Even though there are no simple SEO formulas anymore, appearing high in search results is more central than ever for online marketing. Thanks to relentless development effort on the part of search engine developers, good SEO is now identical with high-quality web design. This is our passion at Zero Gravity Marketing, and we’d love to talk with you about all the elements that contribute to optimizing your site.