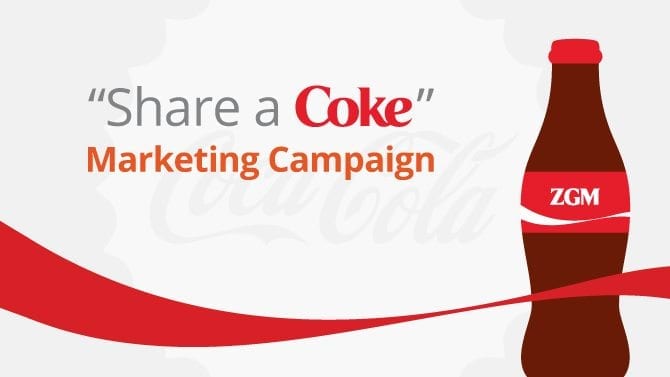 You know that feeling you get when somebody says your name? Whether it’s the barista at your favorite coffee shop or your neighbor across the street, it makes you feel valued, appreciated, and even a little special. Now think back to when you were a kid and you got to pick out a keychain at the gift store on vacation; you know, the one with your name on it. It was pretty awesome that this little trinket was made just for you, wasn’t it? If only there was a way to capitalize on these emotions to boost sales. Oh, wait, that’s exactly what Coca-Cola did with their “Share A Coke” marketing campaign that took the nation by storm this summer.

What Was the “Share a Coke” Marketing Campaign All About?

Essentially, Coca-Cola realized that the younger generation (teens and Millennials) were not drinking their classic beverage near as much as their predecessors. So they looked at what drives this age group and discovered that they love social media and they love themselves (after all, aren’t these the folks that invented the selfie?). In order to take advantage of both of these infatuations, Coca-Cola decided to get rid of the logo on their label (gasp!) in exchange for the most popular names of their target market. For those with uncommon names, Coca-Cola also included general labels, such as BFF, Soul Mate, and Coworker.

What Made their Marketing Campaign So Special?

Pretty much everything. This marketing campaign combated so many different angles in one that it really does qualify as pure genius.

What Can You Learn?

So why does all of this really matter? Because it’s a great lesson in marketing. If you want to boost brand awareness and drive sales, you need to get the people’s attention by drawing on their innate human emotions—in this case, wanting to feel special. Not quite sure how to do this? Don’t worry; we’ve got your back. At Zero Gravity Marketing, we are all about improving your brand’s awareness and increasing sales in powerful ways. Contact us today to see how we can bring your company to the next level.