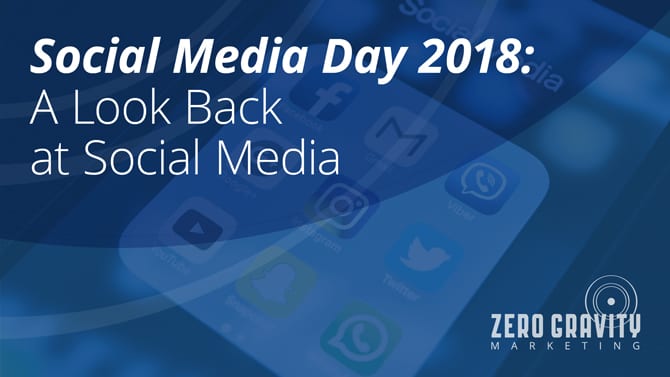 The phrase “social media” today is pretty commonplace. Ask just about anyone and they can likely name at least a few of the popular networking sites. From Facebook to Instagram and Twitter – there are so many ways to connect – each one serving its own unique purpose. This wasn’t always the case though. Ten years ago, if you had asked, a much smaller population of people would have been familiar with the sites. Now, social media has exploded into a far-reaching phenomenon that continues to innovate and has had an impact on communications capabilities across the globe. In fact, Pew Research suggests that 88 percent of people ages 18-29, and 79 percent of people ages 30-49 use some form of social media.

Back in 2010, Mashable chose to name June 30th “Social Media Day.” It has continued to be celebrated each year as social media becomes more and more integral to daily life.

In honor of this special day, we’re taking a look back at how communications have evolved over the years and the ways it continues to change lives.

Life before social media might have been a bit more private, but it certainly wasn’t without difficulties. Believe it or not, there was a time when in order to share a story with a friend about happenings in your life, you’d have to hand write the details out on paper and then mail it out. You then would have to wait until the postman delivered it to that address which sometimes took a week or longer, and that’s not counting how long you’d be waiting to get a response back. Need an important report for a staff meeting? Better ink the typewriter tape, because pecking at keys line by line was the only way.

To say communications alone has been transformed by social media is an understatement.

As time progresses and technologies become the norm in our daily lives, it can be easy to forget that firing off a quick text and hearing back in less than a minute or starting a video chat are luxuries we didn’t always have.

The social media platforms we’re familiar with today aren’t the first ones to attempt to bring together communities of people online. The early 90’s had its fair share of sites that hoped to start a communication revolution that would allow people to keep in touch. But the Internet was spotty, slow, and the generation that would latch on to Internet technologies were still in grade school.

Fast forward several years and many technological advancements later, humans were much more confident in using computers, and social media got its stronghold.  Both on the consumer level with sites like Myspace, allowing people to keep in touch with friends, share photos and interests, to enterprise communications capabilities that were making it easier to connect and be productive.

Today, social media has arguably become one of the most important technologies of our day. From personal to business communications, it is the fastest, easiest, and most affordable way connect and share information.

While older generations — those who grew up before social media came on the scene — have been slow to adapt, they too are starting to warm-up to technology for its convenience and relevance in everyday life. Younger generations and millennials are dictating the trends and movements happening in social media more and more. Whatever features they are using or demand, you’re likely to see companies innovate to deliver. They are using platforms like Facebook, Twitter, Instagram, and Snapchat as a primary means of communicating with their peers, and businesses are leveraging them to connect with customers and build brand awareness. As this reliance increases, social media will continue to have a permanent place in the world and one that gets better with each passing day.

Where Social Media is Headed

Social media networks are constantly changing and adapting to new microniches of users, meaning that there’s a good chance they’ll be around for a long time. Aside from users posting about their daily happenings or sharing interesting and informative news clips, social media has become a place to voice opinions, share user-generated content, and even broadcast live for millions of viewers that want to connect in-the-moment.

Where social media goes next remains to be seen but if this past decade has been any indication of the tremendous impact and evolution – there will certainly be lots of new and exciting things to come.

How are you celebrating #SMDay? Connect with us to share!

10 Mistakes to Avoid on Your Path to Ecommerce Success