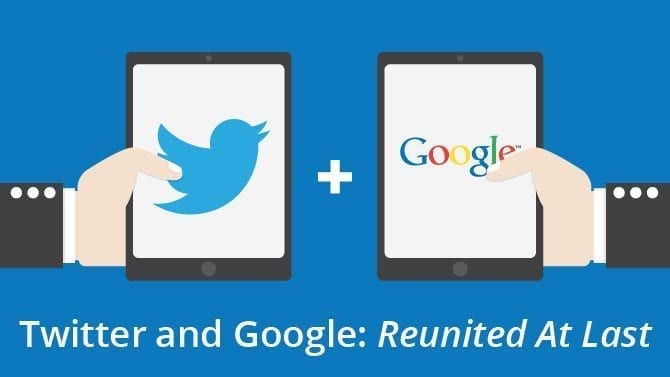 Everybody enjoys a love story with a happy ending, which is why it’s so exciting that Twitter and Google seem to be making amends. Sure, they had a rough breakup in 2011, but Search Engine Roundtable reports that they have apparently overcome their differences. There aren’t that many details released at the moment—it’s still a secret affair—but that doesn’t mean we don’t have our own ideas about how it’s all going to go down. Here are our answers to your most pressing questions about this rekindled romance:

What is different this time?

If you were aware of the split between Google and Twitter in 2011, after Twitter only allowed Google direct access to their feed (AKA the firehose) for a year and a half, it would seem like this reunion would never come to fruition. Google presumably lost a lot of money on the deal, considering they set up an entire service called Google Real Time Search, which went kaput immediately after Twitter pulled the plug on their partnership. So what prompted the pair to come together again? In short, they need each other.

This is the perfect example of a mutually beneficial relationship. Google has always been on a mission to provide its users the most relevant results. And guess which website often gets news information before all others? Yep, Twitter. The real-time tweeting done on the platform just can’t be rivaled by traditional news websites. The second something newsworthy occurs, there is someone, somewhere tweeting about it—and with Google’s traditional crawling methods, they can’t keep up with the second-to-second updates.

So how does Twitter benefit? Just like with all websites, the more they are shown on Google’s SERPs, the more traffic they will get. But in the past, Twitter wasn’t really up to speed on how to capitalize on their logged-out visitors. You had to login to see anything, and if you didn’t have an account, you probably just closed the window and picked a different site to visit. Now, however, they have figured out that they need to show these logged-out visitors content, and then increase their revenue with ads or conversions.

Our guess is no. We just don’t see Google going all out with a designated Twitter search area like they did last time—you know what they say about fooling people twice. However, with the firehose connection of tweets, the social media site will surely be deemed relevant way more often than they are now.

When will they become reunited?

There are a lot of logistics to work out, which is why Search Engine Land believes it is going to be at least a few months. But that’s actually good news for you, because now you can get to work building up your Twitter presence, ready to capitalize on your efforts the day the partnership goes live. And yes, we are always available to help you out with your social media marketing, so don’t worry about that.