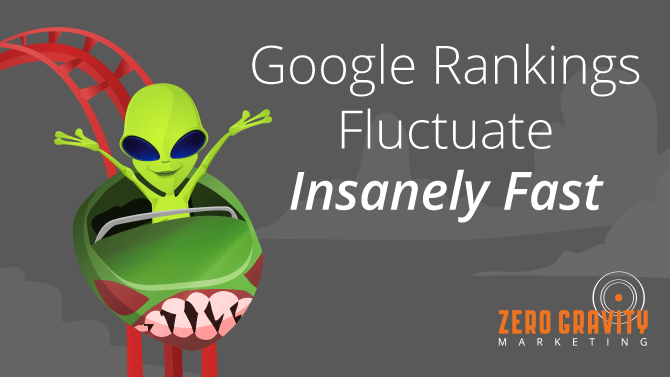 You check your Google rankings and you are ecstatic to be shown as the #4 listing! Yay! All your hard work is paying off! But wait, a few days later you are back to page three or four. What gives? Believe it or not, this is a common occurrence. It’s not just you. Chances are you weren’t penalized and you didn’t do anything wrong.

Here’s What We Know

Whenever we see any impressive gains or demotivating drops in a matter of days, we do two things:

By evaluating these two pieces of data, we can come conclude that Google had influenced the rankings; however, no official algorithm change has taken place. In other words, it’s a god possibility that Google was testing out a new algorithm. You got a quick bump while it was in effect, but they finished the test and now the search engine results page is back to how it was before.

Google is pretty smart, and they are not going to just blindly implement a new algorithm without first making sure it has a positive impact on click-through rates. As Matt Cutts explained to Search Engine Watch, they will compare the clicks of the potentially new algorithm with the old algorithm. But in order to test the clicks, they have to make the algorithm live. If the new algorithm outperforms the old, then there is a good chance it will become permanent soon enough.

What You Can Do About It

First, do not get disheartened if you see a sudden drop after a sudden rise. This is just part of the process. Since Google doesn’t announce their tests, and there’s no way for us to know exactly what is happening, and the best thing we can do is stay the course. It’s imperative to stick to the essentials—like adding keyword-rich, relevant content on a consistent basis.

We understand that it can be frustrating to see your Google rankings fluctuate so dramatically for no apparent reason, but trust us; your ethical SEO efforts will pay off. Before long, you will reach page two (or even page one!)—no algorithm testing needed. Contact Zero Gravity Marketing today to ensure you have the proper SEO tactics in place to gain your rightful place on the SERPs.