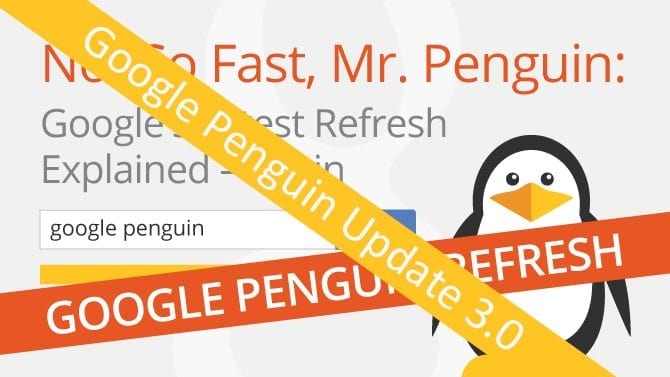 What’s the Deal with Google Penguin?

If you think the latest Google Penguin update seems to be going on forever, you are not wrong. It is still happening, but the question now is whether or not these changes are still part of the Google Penguin 3.0 update that occurred in October, or is there more to the story? According to recent reports by Search Engine Land, it could be a little of both.

Google Penguin History In A Nutshell

Before we get into the latest speculations, let’s briefly cover the essence of Google Penguin. Basically, the Penguin algorithm was created in 2012, with a focus on penalizing sites with unnatural links. However, unlike its counterpart, Google Panda, this algorithm was only going to be updated sporadically. This meant that if a site were penalized, they would have to wait for the next update for their rankings to improve, even if they made changes immediately. And boy did Google make everyone wait. Between October of 2013 and October of this year, there were absolutely no updates.

So what’s the rest of the Google Penguin story?

Well, when webmasters started complaining to Google about their SERP changes during the holiday season (A.K.A. the busiest shopping time of the year), Google claimed that these fluctuations were nothing new and they were simply the remaining rollouts of Google Penguin Update 3.0.

But do we buy it? Not really. According to other updates in the past, updates shouldn’t take two months to complete. Also, there have been a lot of companies reporting substantial fluctuations these past few weeks, and most official Penguin algorithm updates have very little changes near the end of them.

But here’s the kicker:

In the response from Google—claiming that they were still rolling out Google Penguin Update 3.0—they also said that there isn’t going to be a clear end in sight. Why? Because they are now implementing continuous Google Penguin updates, as reported by the Search Engine Roundtable. Basically, if they find something that needs changing, they are going to fix it right away instead of making webmasters wait for months on end to see their hard work get rewarded.

For most sites, it really shouldn’t make a difference whether the Penguin algorithm updates every month or every year. As long as you are following Google’s rules in regards to inbound and outbound links, you have nothing to worry about. And if you aren’t following their rules, well, you have bigger problems to focus on.

So, in summary, even though Google unofficially promised not to make algorithm updates over the holidays, the fact that they are upping the ante on the frequency of each Google Penguin update is a welcome change.

What to Look For When Choosing a SEO Reseller in Connecticut