What is The Future of SEO? 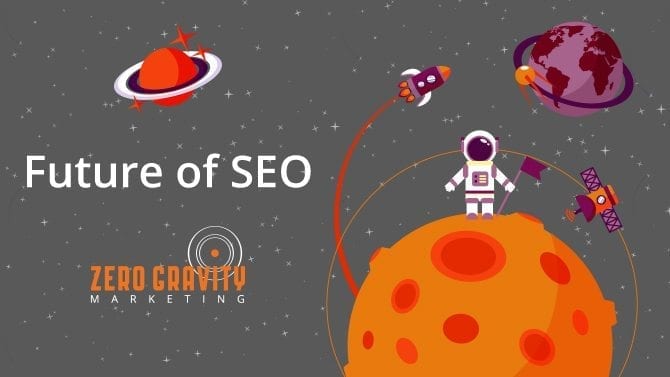 What Does the Future Hold for SEO?

Exciting things are happening in the world of SEO. With mobile devices becoming more intuitive and people becoming accustomed to instant answers, showing up on search engine result is going to be more important than ever in the months and years ahead. Here is how we picture the future of SEO:

With Siri (Apple) and Cortana (Android) and Alexa (Amazon) becoming household names, it’s clear that we love the possibilities that voice search has to offer. It’s so easy to use—even when running errands or exercising—and with the continued introduction of wearable technology, like the Apple Watch, voice search is only going to become more and more popular. We also see audible search results becoming the new norm through these devices.

Search Customization Will Combine with Technology for Incredible Results

Search has already come a long way over recent years, and we believe it will only continue to be more customized to the specific needs and wants of the searcher. And with artificial intelligence already being implemented in Google, there’s no saying just how far this personalization will go. With inventions like Google Glass, it’s not a stretch to imagine a world where we get results delivered directly to our eyeballs, ear canals, or brain.

In the future of SEO, we see search engines becoming proactive, making suggestions to you before you even have to search for them. Can you imagine logging onto your computer to have Google remind you that it’s your spouse’s birthday, and then offering to place an order for flowers for you? It’s pretty crazy to think about, and it’s not too far off from becoming a reality.

Videos and Interactive Websites Will be Crucial for Success

Not only will videos and infographics continue to rise in viewership and popularity, they will also become indexable. Interactive websites are surely a huge part of the future of SEO, and they will be an integral part of gathering data from visitors. Thanks to these advancements, remarketing will also take it up a notch or two.

The Battle Between Google and Apple Will Get More Intense

Another huge factor to consider when predicting the future of SEO is the battle between Google and Apple in the quest to rule the Information Age. While Apple may have better brand loyalty and device penetration, they also tend to restrict a user’s choices—which most people don’t like. On the other hand, Google gives the people want they want, and they continue to develop new tech options besides mobile devices, so unless they make a big mistake, we see them coming out on top on this one.

The Cloud Will Reign Supreme

In the future, most computers will act merely as screens and keyboards.  Most of the processing will be done in the cloud.  All of the programs and data we need will be accessible from everywhere. Similarly, website building is only going to get easier as software advances. However, this means that website owners will need to pay extra attention to search engine optimization since their competition is going to increase.

Content is Still a Huge Part of the Future of SEO

As algorithms get smarter, the quality of content is only going to get more important. Not only will it need to be well written and engaging, but we predict algorithms will also be able to interpret the accuracy of the information being given. Keywords will become less important as the search engines begin to understand topics.  We believe that in the near future, Google will stop formally announcing algorithm changes. In fact, we wouldn’t be surprised if Google holds back from releasing huge unilateral algorithm changes at all because of potential backlash from website owners.  Any algorithm changes will likely be more gradual and difficult to pinpoint.

In our opinion, Facebook usage is on the decline, and now that they are a publicly traded company, they will be forced to make some major changes to keep the investors happy. This will likely include partnering with a major search engine (like Twitter did) so their huge database of the likes and dislikes of certain demographics can be put to good use. After all, very few websites know as much about its users as Facebook.

SEO Will Be Required for Everything

The bottom line is that the future of SEO is very bright. Anything that is searchable will require a strong SEO strategy to be found due to increasing competition. From LinkedIn profiles to video games in the App Store, everything will need to employ SEO to help garner awareness and engagement.

Are you prepared for the future of SEO? With Zero Gravity Marketing on your side, you can be sure that you won’t get stuck in the past.